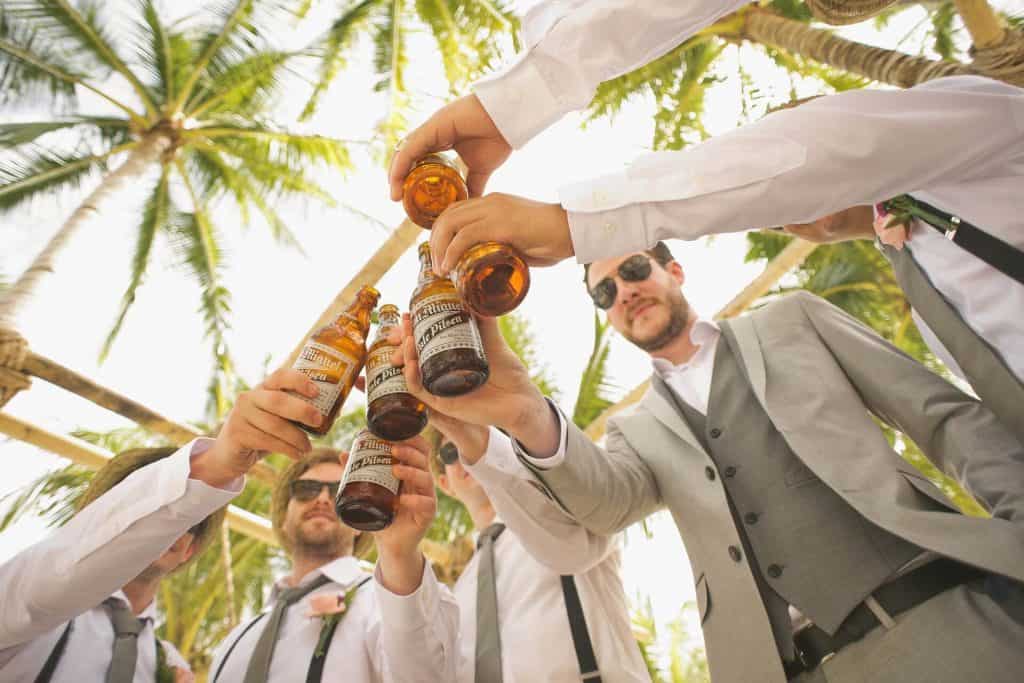 Even though we are in the midst of a rainy summer, veiled with a few days of heat, many men asked me – some jokingly, some seriously – if the beer makes us gain weight.

Now seriously: which foods are fattening and which ones are not fattening?!

Women usually do not ask, they think they already know and go on the principle that they are drinking beer today and dieting tomorrow. Or Monday.

Still, the question remains: does the beer gain weight or not?

Leaving aside simplistic assumptions about calories or glycemic indices calculated on other bellies than yours, let’s see together what happens to beer after it passes through the mouth.

There are probably a lot of beer recipes, but they all contain the same main ingredients: water, yeast, malt and hops, with a maximum of 5-7% alcohol.

Of course, I talk about serious beers – untamed neither with “identical natural” flavors, nor with artificial sweeteners, nor with HFCS (high fructose corn syrup), beers for masculine men, not for women on the lemonade diet.

So, if we put aside water, yeast and hops –which, although good, in themselves, do not bring anything from which the body can make fat – the only nutritional intake from beer that actually can make you fat is the malt’s starch that is mostly transformed by Saccharomyces cerevisiae into alcohol.

So, the legitimate question would be not “if the beer makes us gain weight”, but “if alcohol gets fat”, because a bottle or can of 500 ml of beer contains on average as much alcohol as a glass of 200 ml of dry wine (to compare serious beers with serious wine).

Before we talk about the ability of alcohol itself to increase or not the percentage of body fat, I would also like to mention the impact of beers with lower or no alcohol content. Such beers contain “fried” starch – that is attackable by salivary amylase (assuming, of course, that they did not add any other “sugars”).

However, because we do not chew beer – the impact of salivary amylase is minimal, having a time of action equal to the actual time the beer spent in the mouth –, from the contained starch can be obtained only some maltose and malto-oligosaccharides.

In the stomach, salivary amylase is inactivated when the pH falls below 4, and in the 5-10 minutes when the beer is there, neither maltose nor malto-oligogazaride have any digestion.

Due to the intestinal absorption mechanisms of glucose, if beer is drunk apart from a full meal, no matter how little glucose would result from the metabolism of the beer, it will be completely absorbed. On the other hand, if the beer is consumed as part of a complete meal – along with a salad and barbecue, for example – the amount of glucose actually absorbed after beer metabolism can vary.

So no. 1: strictly from the point of view of minimising metabolic impact to avoid fattening, beer should be consumed at mealtimes and not between meals.

Another thing we have to take into consideration is that people with irritable bowel syndrome, gastric hyperacidity, or intestinal dysbiosis – caused by either a recent diarrhea or antibiotic, NSAIDS or prescription drugs for heartburn may suffer from temporary disaccharidase insufficiency.

Therefore, because only the monosaccharides (glucose, fructose, galactose) can be absorbed through the small intestinal mucosa, the undigested disaccharides in the small intestine reach the large intestine where they can cause osmotic diarrhea and / or fermentation, bloating, abdominal cramps and flatulence.

If you suffer from an irritable bowel or if you simply bloat often, I have written this special article for you: Simple solutions for people with irritable bowel.

Further, insulin causes the absorbed glucose to be converted in the liver:

Unlike the easy concept of “calories” – ATP can not be “increased” or “stored” because, if it is enough, processes that could further increase ATP are stopped, being replaced by the processes that form energy deposits: either carbohydrates (glycogen) or fat.

But because the storage of glycogen is strictly limited in quantity, and the fat storage is not, the fat deposits will increase:

So no. 2: one beer does not make you gain weight, but the more you drink, the greater the chance of gaining weight.

Now let’s get back to beers with 5-7% alcohol. They do not contain much starch, the alcohol being the only ingredient with fattening potential.

Alcohol does not require “digestion”, about 20% of alcohol is directly absorbed through the stomach mucosa, the rest being absorbed in the small intestine. After absorption, as in the case of glucose, liver passage is obligatory, the liver being the headquarter of alcohol metabolism.

All well and beautiful, except that, during the metabolism of alcohol – from ethanol to acetaldehyde, to acetic acid and, then, to acetyl-CoA –, the cell accumulates a too large amount of NADH.

(Strictly for understanding this article, all you need to know about NADH is that its accumulation in the cell stops acetyl-Coa from entering the Krebs cycle from which you could have obtained, for example, 12 ATPs per molecule of alcohol or 36 ATPs per molecule of glucose.

The NADH build-up generated by too high alcohol consumption leave the cells in anaerobic glycolysis, from which you only get 2 ATPs and a headache directly proportional to the consumed amount of alcohol).

The real problem with the consumption of alcoholic beverages (among which, if you exaggerate with the amount, you can also include the beer) is not only the blocking of the Krebs cycle, but also the blocking of gluconeogenesis (synthesis of glucose de novo inside the body).

Of course, the 25 ml of alcohol in a 500 ml beer bottle will not impact these metabolic processes for too long.

But if the alcohol consumed is higher, the body will go into hypoglycemia, which it will not be able to correct until you eat because gluconeogenesis does not work.

To survive until you feed it, your body will use glycogen stores in the liver and / or will begin the adipose tissue lipolysis.

However, this lipolysis does not mean weight loss, the full burning of fatty acids in the Krebs cycle means weight loss.

Lipolysis means just moving the fat from the fatty tissue to the blood and then into the muscle – a factor generating insulin resistance, at a rate directly proportional to the number of beers or other alcoholic beverages consumed per unit of time. And the insulin resistance causes a lot of fat. And if we add to this resistance and the fact that alcohol generates dezinhibition, we can expect an uninhibited food consumption alongside an uninhibited alcohol consumption.

So no. 3: One or two beers a day will not make you fat, but more might.

LINKS
BooksRead
Oncology Nutrition VlogListen
ArticlesRead
VideoView
What is the metabolic difference between cola light and normal cola?
Top 3 factors that contribute to holiday weight gain & what to do about them