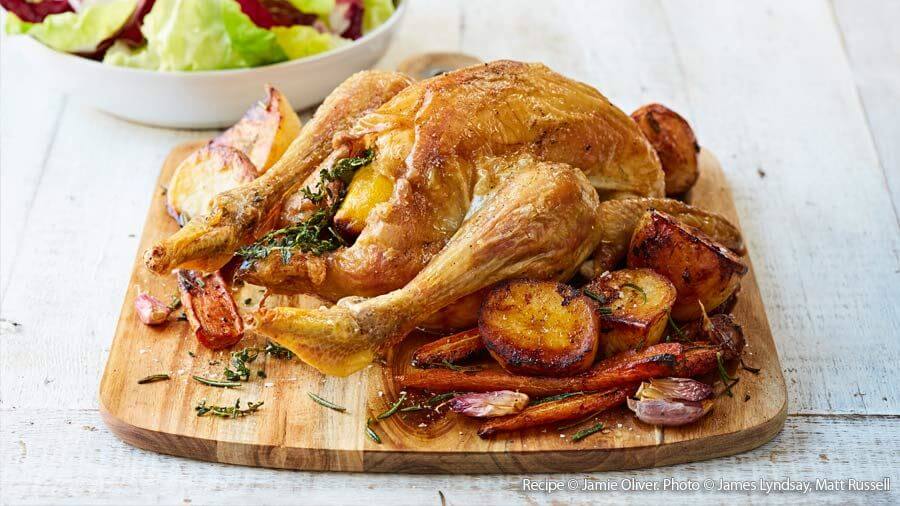 I don’t know how others were raised, but my mother raised me with potatoes and meat. And my mother did not know much about popular nutrition trends then, but I think neither Jamie Oliver’s mother, because based on his shows it seems like he also grew up with potato and meat.

Really! I saw with my own eyes how they cooked together during a Christmas TV show some potatoes with turkey meat that looked so absolutely marvellous that one could eat the TV.

Probably neither my mother nor Jamie’s mother had heard of Montignac or of the gastric juice diluting in the stomach if you drink water while you eat, still apparently some of us grew up with this combination sold as pure heresy by so many self-declared Google University graduates.

And I write “apparently some of us” because, although I think we all grew up with potatoes and meat, nowadays it looks like some started to argue their parents for not knowing basic things like the one stating potato should not be eaten together with meat. Their parents messed up the metabolism they are trying so hard to fix by finally consuming the protein and the carbohydrate separately and by drinking water at least half an hour after eating to not dilute the juice.

Digestion of the fat from the butter and milk used to cook mashed potatoes begins in the stomach and mainly takes place in the small intestine, under the action of pancreatic lipase after being emulsified by bile salts, no matter what other foods you eat at that meal.

Digestion of meat proteins begins in the stomach and takes place in the small intestine under the action of pancreatic proteases, no matter what other foods you eat at that meal.

And no matter what you eat at that meal, the main thing that happens to food within the stomach is mechanical digestion because the stomach works just like a blender, mixing very well all the gastric content.

The idea that some things are digested earlier and others later, or that some things do not digest well because you have combined them with something can be a good subject for a glass of wine chat when you’re imagination runs low, but the stomach digestion result is gastric chyme – a homogeneous semi-liquid mixture of nutrients, less than 0.5 mm in diameter, which is gradually eliminated as small amounts through the pylorus canal in the small intestine.

The main role of the stomach is mechanical digestion.

Nothing rots or ferments in the stomach, because these two processes can only be performed by bacteria, and there are no bacteria in the stomach.

Or, if you painfully feel that in your own and personal stomach are some bacteria, you are warmly invited to the gastroenterologist for a Helicobacter pylori test and proper treatment.

And for God’s sake, if one could dilute the gastric juice by drinking water while eating, no one would even need omeprazole.

And if you’re experiencing bloating after eating, avoid eating too much and please don’t nibble in between meals. No fruit snacks, no coffee, gum or other nibbling, because such behaviour disrupts satiety hormones secretion, influencing metabolism and digestive motility.

The glucose, fructose, galactose, fatty acids and amino acids are the result of the intestinal – not gastric –digestion. And intestinal digestion is the same for all pancreas owners.

– So, did my mother and Jamie’s mother ate potatoes and meat at the same meal because they knew they have a pancreas = internal organ secreting amylase, lipase, and proteases (enzymes perfectly capable to digest any food combination – and even the pancreas itself in case of an acute pancreatitis for example)?

– Nope, I do not think they knew all this.

They probably ate potatoes and meat at the same meal and fed as with such delicious foods because, after such a meals we all felt good.

P.S. To all pseudo-nutritionists out there or to people who believe that the entire world’s gastronomy is completely fucked up I cordially recommend reading Illustrated Biochemistry. It helps weed out the non-sense.

LINKS
BooksRead
Oncology Nutrition VlogListen
ArticlesRead
VideoView
Vitamin C for cancer patients?
What does it mean to be cured of cancer?